Management Training for Modern Barcelona Restaurants When the pandemic gripped Spain, Jose Fontana Bassols was forced to close the doors of the Flamenco restaurant where he was a food and beverage manager. He had witnessed the effects that the 2008 recession had on the country’s economy and knew how reliant Barcelona was on tourism to

When the pandemic gripped Spain, Jose Fontana Bassols was forced to close the doors of the Flamenco restaurant where he was a food and beverage manager. He had witnessed the effects that the 2008 recession had on the country’s economy and knew how reliant Barcelona was on tourism to generate revenue. With travel restrictions in place and the country on lockdown, Jose decided the best use of his time would be to further his education. 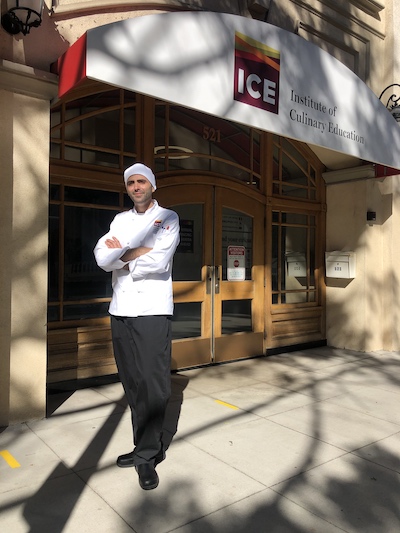 Though he studied business administration in college and managed a number of high-volume, high-end restaurants, including Madrid’s Luzi Bombon and a venue of his own, he knows there is always more to learn about the dynamic industry. “I couldn’t find much in Spain,” Jose says. “I knew I could go to management schools in Europe, like Lausanne, but there was nothing less than two years.” When he expanded his search to include the United States, where his sister relocated several years prior, he came across the Institute of Culinary Education’s accelerated programs.

The Restaurant & Culinary Management program caught Jose’s eye, but he wondered if classes were three days a week, what else he would do with his time. “I saw the Health-Supportive Culinary Arts program and thought, this is perfect,” Jose says. “You can learn nutrition [in Spain], but there’s nothing like this.” He was also enticed by the opportunity to practice English, a critical component to running restaurants in tourist-laden Madrid and Barcelona. Jose enrolled for a dual diploma and headed to Los Angeles to begin his studies in December 2020.

While Health-Supportive Culinary Arts readies students to work in the back of house, Jose values the professional training for his future entrepreneurial endeavors. “I’m not a cook, and I’m not going to be a cook,” he says. “The knowledge is good and will make me much better at deciding what we can do at the restaurant, what can be achieved, how something should look and the techniques my chef should know.” Though he does not follow a diet that is strictly plant-focused, it is a lifestyle that touches close to home. “If you are invited to my dad’s house, you’re a vegan while you’re there,” Jose says, adding that other Spaniards are shifting to plant-focused diets, changing their traditional jamon-heavy ways.

“I want to learn how to combine the modern plant-based cuisine with traditional animal-based Spanish cuisine,” Jose says. He plans to return to Spain and eventually open a concept on the Costa Brava or in Barcelona that meets the changing dietary preferences of Spaniards and the plant-forward desires of tourists. “Obviously plant-focused is important and giving options, but also having well-sourced meats and well-sourced fish,” Jose says. “There is room for it in Barcelona.”

In 2016, after watching the documentary “Earthling,” a film focused on factory farming, Khai Fah Chong’s eating habits were permanently impacted. “I watched eight minutes of it and it immediately changed my perspective,” he says. Khai became a vegan and hasn’t looked back, but in the Southeast Asian country Brunei, where he was born and raised, there weren’t many plant-forward restaurants. “I realized I had to learn to cook in order to survive,” Khai says. “Gradually, I found I really loved cooking.” After completing secondary school with a focus on economics, Khai knew he did not want to move on to college. 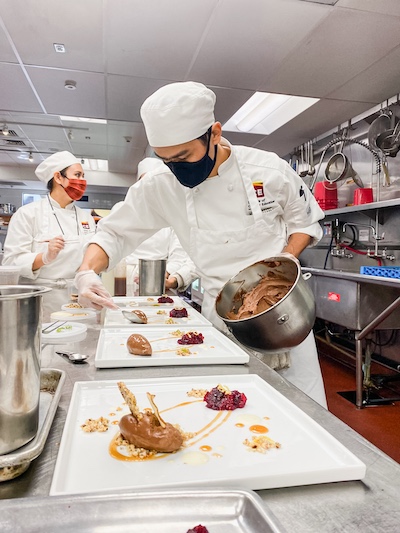 “I definitely knew I wanted to come to culinary school,” Khai says. “I wanted to get out of Brunei as there were no plant-based programs.” He discovered the Institute of Culinary Education on the internet. “I was looking for top-notch culinary schools and found the [now-closed] Natural Gourmet Institute, and from there I spoke to admissions.” In late 2019, Khai applied to ICE’s Natural Gourmet Center, inspired by NGI, and began his studies in January 2020 in California, an ocean away from his small island nation.

“LA seemed really big. Everything seemed big,” Khai says of his first impression. “The sky was always clear, which was amazing, nice and blue.” Though he knew no one local prior to coming to ICE, Khai quickly made friends with his fellow classmates, but only two months into his studies, the campus closed in response to pandemic regulations. During that time, classmates stayed connected — one even offered pilates classes over Zoom — and Khai returned to campus in August to complete his studies.

He landed an externship at Kitchen Mouse in Highland Park and is excited to apply his newfound knowledge. “I really think it shaped my future in terms of what types of food I want to work with,” he says of culinary school. “That was the biggest change I got from the program and the general philosophy of healthy eating of whole foods, mostly plant-based, local and seasonal.” He is looking forward to playing around with the indigenous ingredients of his home country once he returns. “Brunei is a tropical country where you find a lot of exotic fruits like rambutan and durian,” for example.

Khai plans to look for a vegetarian restaurant or vegan bakery to pursue work in Brunei before heading on to Europe for further studies and practical work experiences. “I’m sure my diploma will help me secure positions in foreign countries,” he says. “I want to do it all: I want to work in a café and a luxury hotel and gain all of that experience!”

After he’s soaked up different facets of the industry, Khai plans to open up a dream restaurant of his own.