The young Peter George fantasized about one day becoming a professional soccer player, or what he calls football from his British upbringing, and traveling the world. An avid player as a pre-teen, Chef Peter’s passion for soccer was honed in East London, the neighboring town to where David Beckham got his start. “At 13, I

The young Peter George fantasized about one day becoming a professional soccer player, or what he calls football from his British upbringing, and traveling the world. An avid player as a pre-teen, Chef Peter’s passion for soccer was honed in East London, the neighboring town to where David Beckham got his start. “At 13, I was good enough to be called up for an England junior team, it’s like being an All-American,” Chef Peter explains. For roughly 10 years, he played for the amateur team that fed players to a professional squad.

During that time, however, he suffered a few setbacks. “I started getting injuries — broken kneecaps and ankles — which inhibited my growth as a player,” Chef Peter says. “All the way through my formative schooling I played, but I was not in the position to play as a professional.” 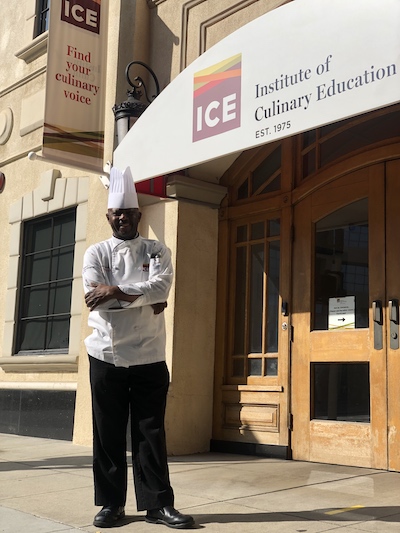 He was forced to find an alternative path to fulfill his desires of exploration. “I needed to find a career that would give me that opportunity to travel, to live, to learn languages, culture, people,” Chef Peter says. “I started pursuing the culinary field.”

Raised in a Caribbean household, he recalls watching his mother and grandmother prepare curries with Indian influences, seafood and shellfish, cassava bread, dishes with coconut milk and plantains and always having plenty of fresh fruit. After high school, he set out to expand his culinary horizons at the luxury Claridge’s Hotel as an apprentice while enrolling in a trade school.

The apprenticeship entailed rotating through each department and station. “We had 300 chefs and cooks in the hotel,” he says. “I learned garde manger, pastry, soups and butchery.” Throughout three years, he soaked up the tasks of the various positions as a trainee. “It was the old-fashioned way, and it took time to pursue the career you were going into.” One of Chef Peter’s mentors at Claridge’s noticed his strong aptitude and work ethic and recommended him to a chef in Paris. Chef Peter’s hope that the culinary field would offer travel opportunities came to fruition.

At 18-years-old, he moved to Paris to learn the popular nouvelle cuisine of the era. “It was beautiful,” Chef Peter says. “In the hotel, all the terms were always in French, all the chefs were French.” Though leaving his hometown was a bit scary, he recognized the challenge as an opportunity for growth.

“I knew kitchen French, but this was the first time I had to communicate completely in a language that was foreign to me – a new lifestyle and living conditions, no security,” Chef Peter says. The one thing he did know: soccer. The sport proved to be the common denominator among his coworkers, which further bonded them together. After two years in Paris, opportunity knocked in the Côte d’Azur in the tony beach community of Cap d’Antibes. “I always wanted to work in cities or places where people vacationed,” Chef Peter says. There he would work as a young chef in a boutique hotel with a clientele of wealthy patrons. “Most of the staff were young people my age from different parts of the world — Norwegians, South Africans, Irish — all different nationalities, a very eclectic group.” Despite the social aspect, he was living the life of a chef. “I had to work and work and work,” he adds. “That refined me to understand the demands and responsibilities of a chef. When others had a break, I had to prep, write menus and order goods.”

After returning to London, life as a chef took him to Germany, Holland and eventually the United States to work at an exclusive country club in Fort Lauderdale, Florida. One club member, who was based in Los Angeles, persuaded Chef Peter to help him open a restaurant in Hollywood, which seemed like an exciting opportunity and one that would take him to Los Angeles for the first time. “It was the hardest I had worked,” Chef Peter says. He left after less than a year and moved to various restaurants in LA, including opening (and closing) a place of his own, before the travel bug bit again.

An invite to Honolulu to join the kitchen at the Hyatt Regency Waikiki followed. “Prior to that I met a young lady, started dating, and though I wanted to continue in my journey traveling, I came back to Los Angeles,” Chef Peter explains. He was offered the opportunity to cook in Russia, but he chose to settle down with his wife in LA.

With a young family, the long hours and demands of the industry led Chef Peter to a new path: culinary education. He started teaching at the Southern California School of Culinary Arts. “I started in South Pasadena while this building was being built and furnished,” he says. Chef Peter has been instructing in the building that now houses our Los Angeles campus for more than two decades. He joined ICE in 2018 and continues to teach Culinary Arts.

Though his work as a chef-instructor no longer takes him to faraway destinations, his lessons transport his students around the world. 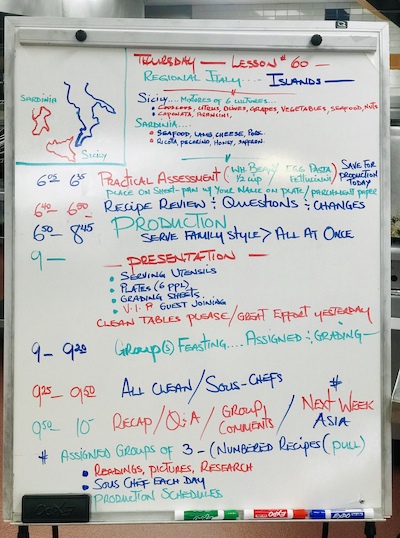 Chef Peter covers cuisine from the Caribbean, China, Italy and France. He instills confidence in students nervous about their first time handling a wok and draws elaborate maps of countries, some of which he’s visited or lived and worked in, to enhance the lesson. Chef Peter goes beyond cooking techniques — he encourages students to follow their passions. “I tell my students, ‘Don’t give up, see your dream as a reality,'” he says. “If you’re passionate about whatever you do, nine times out of 10 it is going to come to fruition. Success is always in the palm of your hand. You have to believe it, see it, take it and make it happen.”

Over his more than two-decade career, Chef Peter has had an impact on thousands of students, and his students have had an impact on him. “Teaching has made me a better person, a better father, a better educator and a better friend,” he says. He is often met at the mailbox with cards from former grads and continues to receive invites from former students to dine in their restaurants. He is extremely proud of those he has taught, offering that they have gone on to become Food Network show producers, business owners, Michelin-starred chefs and even culinary instructors. “Chef [Lachlan] Sands and Chef [Alan] Kang were both my students.”

Though no longer part of a football club, soccer still underscores the work he does today. “I am part of a team to help people fulfill their goals and dreams,” Chef Peter says. “I am very proud to be a part of that team.”